This year, the Basque Country will be the venue for trials on a new floating wave energy converter from Finnish technology developer Wello, to be installed at the BiMEP marine energy test site off the coast at Armintza (Bizkaia). An agreement was signed this month and the device is expected to be installed in the second half of October.

The service provision contract comes after several months of negotiations between Wello, the Finnish owners of the Penguin wave energy collector, and the BiMEP marine energy test site, which is 75% owned by the Basque Energy Agency (EVE) and 25% by the Energy Diversification and Saving Institute (IDAE). After analysing several European facilities, Wello opted for the services on offer at BiMEP for the 24-month trial.

The device will now undergo a two-week journey from its current location in northern Scotland. It will then take up position at its moorings in BiMEP, an open sea restricted site for trialling floating electricity generation (wave and wind powered) devices, located 1.5 km off the coast at Armintza. 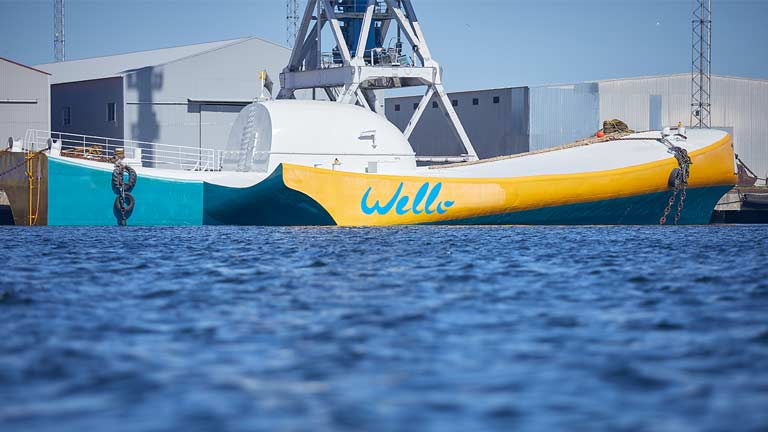 Penguin 2 is a patented wave energy converter. From outside, the floating device looks much like the hull of a boat, with an optimised design for greater wave energy capture and a rotating device inside. The waves cause this interior part to rotate, which is connected to a generator, and thus produces electricity. The maximum power of the device is 1 MW and the energy generated, even being a test, could reach one million kWh. This power will be transferred to land via BiMEP’s sub-sea cables and then sent to the grid.

A key feature of the Penguin is that it has no hydraulics, joints or gears making it unique in this category.

Wello plans to continue trialling the device’s power production and control software in Basque waters. Italian firm Saipem —a world leader in engineering and other offshore activities— has teamed up with Wello to carry out the Penguin 2’s marine operations. They will use the experience gained in this undertaking to help them in setting up other Penguins throughout the world.